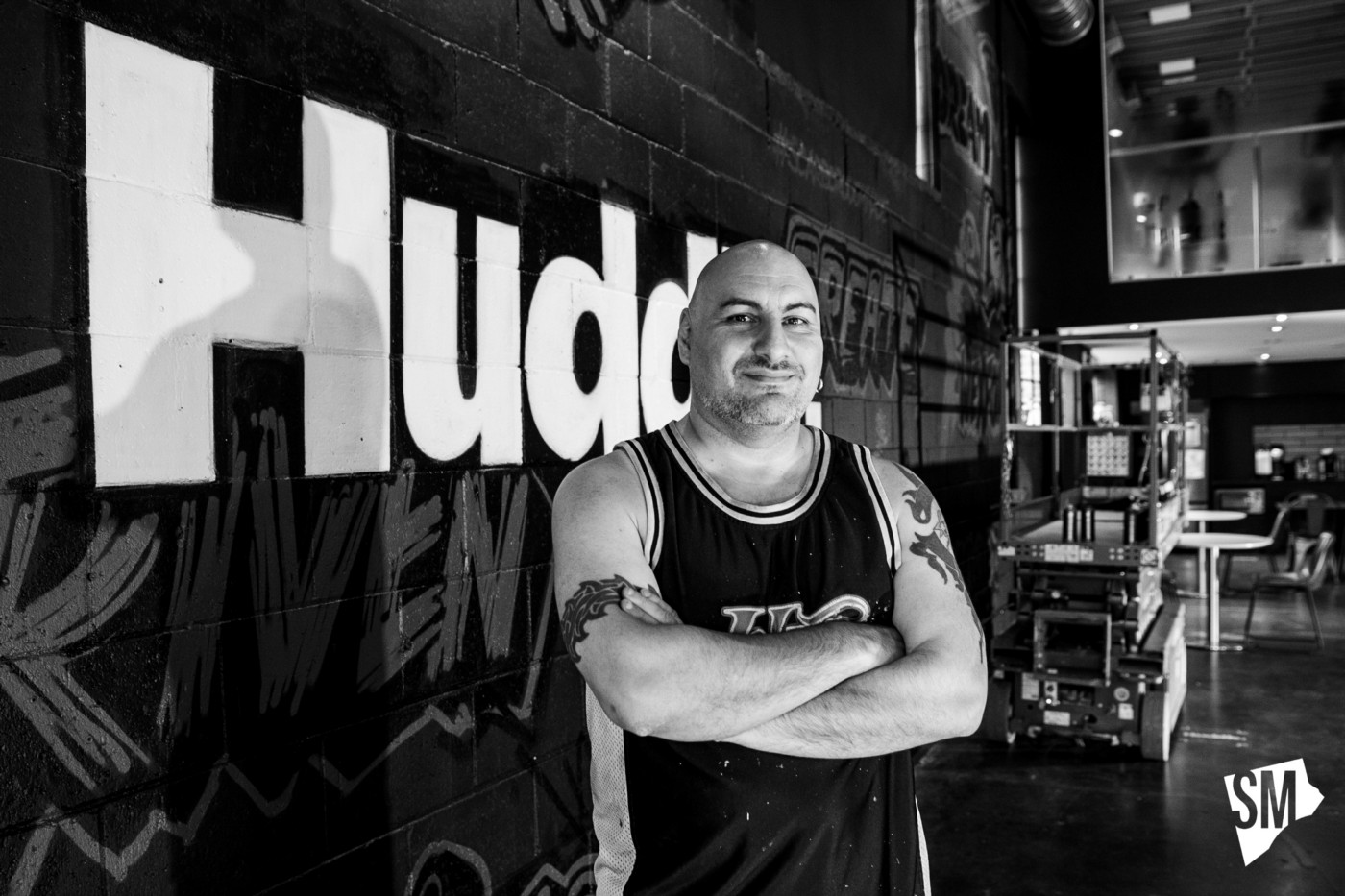 Lawrence Avenue East is home to some of Scarborough’s greatest treasures, and within this treasure box, you can now find a word mural painted by Scarborough’s very own graffiti artist and icon, Duro the Third.

You may know Duro’s most recent works, the Scarborough Royalty mural that came to life at Nuit Blanche in 2019 under the curation of Ashley Mckenzie Barnes and is now also housed within Scarborough Town Centre. Duro’s #ScarboroughMade origins as a graffiti artist hails from Midland and Lawrence, where he first made a name for himself. We got a chance to chat with Duro about his story as an artist and the current mural he’s creating at Huddle Sharespace on Lawrence Avenue East. SN: Duro, I know you as a legendary graffiti artist hailing from Scarborough; where did the name Duro The Third come from?

My name back then was the Spanish Knight, and then in 93, my dad gave me the name El Duro, Athuro El Duro. I was like oouu I like that the hard one. It means hard in Spanish. Then at the end of 93, I met crazy legs and all these very famous breakdancers from the movie Beat Street. He saw my portfolio and said, and your El Duro? I said yeah, and he goes, there’s a Duro in New York, and a Duro in France. So then I go, I guess I’m “Duro the Third,” and I liked it because in my head I heard this very snobby Englishman saying “Duro the Third” It sounded bomb. It sounded like royalty, and so I was like, OK, I like this. This is some royalty shit. I’m Duro the Third!

SN: Where did you learn and pick up graffiti as an art?

I was always doing art. I’ve been in art schools since the age of 10 for the gifted. I grew up with my cousin, and he taught me how to do graffiti. We lived in the same building at 1375 Midland Avenue. I was on the 11th floor, and he was on the 7th floor. My cousin was part of the crew known as the Graffiti Knights. My cousin had already retired; he was going to OCAD, but I was obsessed with it, and so I started doing it. At the time, I started doing 3D letters. I was the first Canadian to do 3D letters without outlines so that it comes off the wall, something that had just been invented in New York City. I started hitting up the RT line hard overnight. I’d be there 3:00 in the morning bombing, and then I started getting famous. People were like, Who did it? Who did it? SN: You mentioned you had some support from your high school that grew your career as a graffiti artist. That’s something usually unheard of; tell me more about how that came about?

I went to Wexford, and the art director of my school really liked me. He thought I was very ambitious and outgoing, so he gave me the school to paint. I painted the whole school and started getting attention, so he got me other high schools to paint. From there, I started getting on the newspaper, the radio and TV interviews, and my graffiti career grew. By 95, I was massive, and then around 2001, I quit.

I just came out of retirement 5 years ago, and now I’ve gotten bigger than ever because I have a new style that I have brought to the masses called Word Walls, which is specifically created for clients to show all their services. So that’s basically my graffiti career for 32 years in a nutshell. SN: This year, the Scarborough Made project is exploring the theme of resilience. I wanted to ask you what does resilience means to you in this current time of ours?

In the first week of covid, I lost 15,000 dollars in two jobs. That month I made no money and I was like, what am I going to do?

So I started customizing BMX bikes, and now I’m the biggest guy in the world for doing it. It led to a zillion opportunities in California, Florida and New York. I just did a custom bike for Space Jam with Warner Brothers. So the fact is you have to be multifaceted. You can’t put all your eggs in one basket. You have to take that creativity and whatever you do, offset it to something else and start a business or make people happy doing something different. With social media, it’ll work. There were many people who pivoted during COVID that actually are now way more known for that than what they were originally known to do. So I’m glad I survived, but it’s also on my work ethic. I worked every single day. I don’t take those days off. I’ve never had a vacation in my life. I don’t even know what that means. I take two naps, and I’m OK. When you’ve grown up on Midland & Lawrence, trust me, you want to work hard to evolve. SN: What does it mean to have your work commissioned to go up by Scarborough businesses like Huddle Sharespace, and what do you want people to see?

It makes me happy for numerous reasons. One, they like me as a person. It’s one thing to hire someone who’s good at a job, and it’s another thing to actually like them for that. Two, I grew up three blocks away from here. I could walk to my old house; my parents still live in Midland and Ellesmere. This has been an evolution for me because I changed my entire style to fit corporations and businesses, and it’s working. I’ve been to a bunch of working spaces downtown, and they’re not like this one. It shows is that everyone here is somewhat the same age. Everyone’s evolved and they’re bringing it back. It’s very cool to see people are actually investing in Scarborough and not trying to be on Queen or King Street. Many people don’t get it, but people from Scarborough usually get it and now there’s a certain pride for Scarborough, which was once lacking. People are so proud when they see Scarborough represented, they are mega proud, and that’s what I want them to see. For me, Duro’s latest word mural at Huddle Sharespace is an example of how the community is being built in Scarborough through the arts. I see this collaboration between Duro & Huddle Sharespace championing the idea that people from Scarborough are central to leading the innovation needed to build back better in our own neighbourhoods.

Scarborough is a large contributor to Toronto’s economic and cultural development, and for a long time, we’ve lacked recognition for our contributions. It’s time we change that narrative by letting the world know how vibrant and resilient our communities truly are.

While there has often been a lack of space to provide local entrepreneurs, artists and start-ups with a home base in Scarborough, I believe Coworking spaces like Huddle can lead the charge to build and support a needed entrepreneurship ecosystem for Scarborough.

As the reopening of the province moves forward, Huddle Sharespace is getting ready to bring the community together once again, and with this new mural, Duro’s The Third’s work now hits closer to home from his roots on Lawrence Avenue East.

Scarborough Made is a social impact art project documenting stories in Toronto’s East.

Sid Naidu is a documentary photographer, international development advocate, and Co-Founder at the Scarborough Made Project.